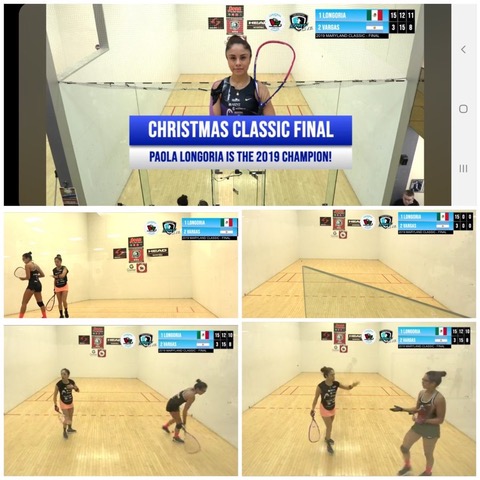 HEAD Penn’s Paola Longoria (San Luis Potosi, Mexico) dominated the Ladies Professional Racquetball Tour (LPRT) Turkey Shoot Open at the Glass Court Swim & Fitness Club outside the Windy City. Paola lost just one game all weekend en route to winning both the Women’s Professional Singles and Women’s Professional Doubles divisions in Chicago. The singles victory against Monserrat Mejia became Paola’s 101st tournament win of her professional career. She has now won 455 matches on the LPRT to just 31 losses. In doubles play Paola teamed up with Samantha Salas, against Monserrat Mejia and Alexandra Herrera, and won after a great comeback after losing the first game 4-15, and then won the next two, 15-10 and 11-7. At the Turkey Shoot Open the doubles win became Longoria’s 41st tournament victory. Her overall match record in doubles is 122 wins to just 7 losses. Paola has never lost more than two doubles matches in a single season on the LPRT.

I believe coaching Paola Longoria virtually made a huge difference in the doubles comeback as we made an adjustment on both Paola’s and Samantha’s serves.

The World’s No. 1 player , Paola Longoria, wins third LPRT event in a row to finish the first half of the year.

HEAD Penn’s Paola Longoria (San Luis Potosi, Mexico) wrapped up the 2019 calendar year by winning her third Ladies Professional Racquetball Tour (LPRT) event in a row. Paola’s win in the Women’s Professional Singles division at the Christmas Classic in Maryland became her eighth victory in nine tournament appearances for the year. Paola played well against Maria Jose Vargas in the championship singles final and won in a tie-breaker 11-8.  I believe it was the match of the season thus far as Paola was down 0-6 in the tie-breaker, and won 11-8 out scoring Maria 9 points to 2 points…what a comeback. No matter what the ladies put on a fantastic show for the world of racquetball to see. Just minutes later Paola is back on the court to play doubles with Samantha against Maria/Natalia and made another great comeback after losing the first game 12-15, then winning the next two 15-11 and 11-4.

Once again coaching Paola Longoria with Magaly Zeron, Paola’s sports psychologist, virtually made a huge difference in the singles and doubles comebacks as we made adjustments mentally and physically for both Paola and Samantha. It’s the little subtle things that make a huge difference.

Paola Longoria’s next event is this weekend in Davie, FL January 10—12, 2020…her first tournament of the 2nd half of the season.