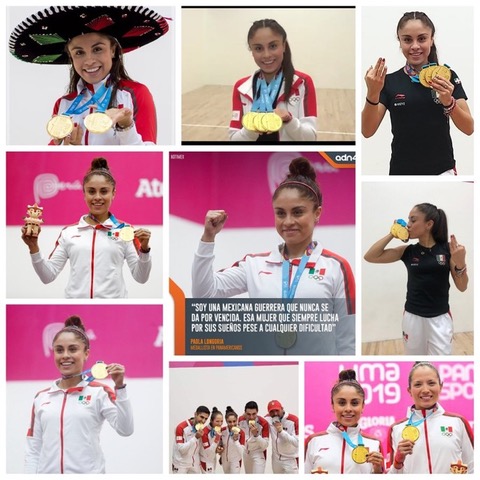 It wasn’t an easy road as Paola and Fran Davis, Paola’s Coach, had to make adjustments during the Women’s Doubles Finals against Guatemala and come back from a 1-5 deficit in the tie-breaker to win it 11-5.

In the Women’s Team finals against Argentina Paola once again was down 5-11 in the second game, after the winning the first game, and took a time out to regroup and adjust and went back in and rattled off 10 points to win the game and match.

For her Pan American Games career, Longoria has now won a staggering NINE gold medals, making her the most decorated Pan Am Games athlete from Mexico in history. The coolest part is Fran Davis, her coach, has been by her side for all NINE gold medals in 2011 Guadalajara, 2015 Toronto and now 2019 Lima. We are a GREAT team.

Paola Longoria’s quest for a sixth perfect season event on the Ladies Professional Racquetball Tour (LPRT), started in her hometown at her name sake tournament, “The Paola Longoria Experience”. Paola cruised to the title in the Women’s Professional Singles Division without dropping a single game. Paola has never lost a professional singles match in San Luis Potosi, her hometown, and now holds an overall record of 24 wins and 0 losses.