CONGRATULATIONS to ROCKY CARSON for winning the Championship 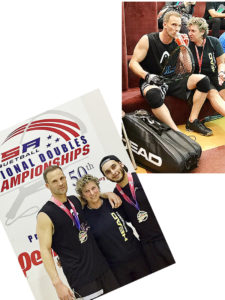 Rocky Carson teamed up with Jose Diaz to win the Men’s Doubles Team U.S.A. Qualifying Division in Tempe, AZ February 8-12. The duo won a thrilling 11-10 tie-breaker, after losing game 1, 5-15, in the Championship Final. It was a pleasure coaching them live court side and seeing the adjustments that we made work winning game 2, 15-12, then the 3rd game 11-10.

Rocky also won the Men’s Singles Team U.S.A. Qualifying Division contested at the event in Arizona. With his wins in both the doubles and singles division, Rocky has solidified his position on the U. S. National Team for the 15th time in his career and will represent the USA in all International competitions such as Costa Rica, China, etc.

All Rocky’s matches are archived on the www.teamusa.org/USA-Racquetball

Paola Longoria had much needed time off as at the last event of 2016 in Laurel, MD Paola cruised to yet another LPRT Professional Singles win. The title in Maryland became the 78th of her professional career and pushed her tournament winning streak to 22, spanning all of the 2016 calendar year. 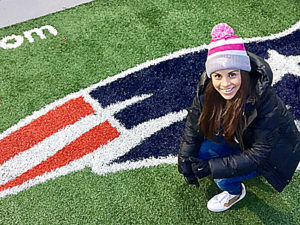 Paola is feverously back training for her next Ladies Professional Racquetball Tour event in Warren, NJ, March 3-6.

Paola also was invited and attended the AFL Championship Game in Boston, MA and the Super Bowl in Houston, TX as she is an avid fan of the New England Patriot’s. Next time you see her ask her about her experience…amazing.

Jordan Cooperrider and Mitchell Turner, both came to Seattle, WA over the Christmas Break and spent a week of training with me and some of our local Open and Elite players Rick Charbonneau, Rocco Vega, Jerry Evarts and Estaban. 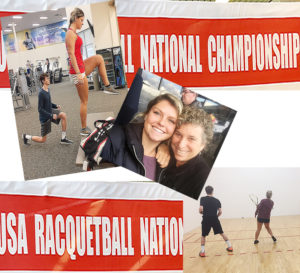 We covered every aspect of the game and made some much needed tweaks based on their play in the first half of the 2016/2017 season. We drilled lots, played some, watched valuable video of their matches from the World Championships and US Open Championships, looked over their journals, developed/revised their training schedules, and went over lots of mental toughness. It was a FABULOUS week of racquetball and fun times.

Wayne Antone was plagued with an elbow bruise from the Junior World Championships so came up to Seattle, WA later to train with me and be an assistant coach at my camp January 27-29. 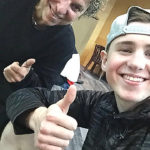 We spent time on the court prior to the camp and worked on many aspects of the game and made some much needed tweaks based on his play in the first half of the 2016/2017 season, especially from the Junior World Championships.

I had 2 very successful racquetball camps held in Atlanta, GA January 20-22 and Seattle, WA, January 27-29. They were both great groups hungry to learn how to utilize the philosophies of my championship racquetball systems. It was a great fun-educational experience by all participants.

Everyone wants to hold a National Championship Title from the pro division all the way down to the amateur divisions, which is what makes it so competitive and exciting.

I had so many of my students and our campers attend this event. …CONGRATS to all of them:

I had to wear so many hats such as coaching, run the HEAD Penn booth, commentate on the USA Live Stream production, sell our “Championship Products” …book, video and camps and and and, but I LOVED every minute of it.