How do the Pros stay cool, calm and collected during a match?

That is the million-dollar question, but it can be answered. The more relaxed and at ease you are, the better you will play. The more uptight you are, out of control, and full of rage, the worse you will play.

Just take a look at these professional athletes and you will see what I mean:

In the finals of the US Open Paola Longoria, the #1 Player in the World, played against Frederique Lambert. There was a questionable call in the 3rd game that resulted in a side out against Paola putting Frederique in the service box. It was a huge point in the match because it was 2-0 in games for Paola and she wanted to win in 3 games and NOT go to a 4th. Paola questioned the ref and said a few words, but then went back to receive the serve and Frederique scored and won the game to push it to 4 games. If Paola dwelled on the bad call and lost her cool it could have possibly cost her the match. Instead she stayed cool, calm and collected which kept her in the match, winning the 4th game and the match. 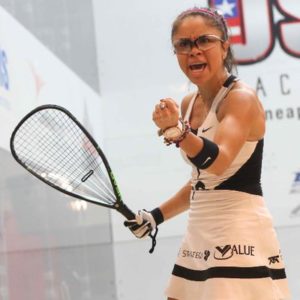 It was 7 – 7 in the tie-breaker of the US Open semi-finals against Jack Huczek and Jason was serving. Jason hit a shot he thought was a winner which would have put him up 8-7, instead the ref called it a skip which resulted in a side out and Jack now serving at 7 – 7. A huge point in the match. Jason questioned the ref and said a few words, but then went back to receive the serve and LET IT GO. If he dwelled on it and lost his cool it could have possibly cost him the match. Instead he stayed cool, calm and collected which kept him in the match and he WON. 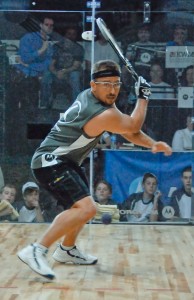 In the semi-finals of the 2018 National Doubles Championships against Adam Manilla/Nick Riffle, Rocky Carson/Sudsy Monchik lost the first game and was trailing 11-13 in the 2nd game. I told Rocky to call a time out and then they came back in to receive serve again. During the next rally Rocky/Sudsy hit a shot that got them back into the service box. A huge point in the match, but there were a few more exchanges of serves. If Rocky/Sudsy lost control and second guested themselves, it could have possibly cost them the match. Instead they stayed cool, calm and collected which kept them in the match and they WON to advance into the finals. 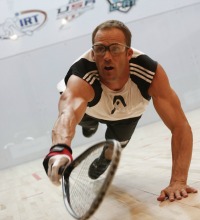 Just like Jason, Rocky questioned the call and voiced his opinion, but then went back to receive serve and LET IT GO!

Below are a few tips to consider to help you learn how to stay cool, calm and collected and not be like a time bomb ready to explode:

1-DO NOT take the calls personally….it is NOT a personal vendetta against you.

2-Take a call for it’s face value…it is ONLY ONE call.

3-Be TOTALLY prepared for the match…be ready to battle…. the readier you are the more relaxed you will be.

4-DO NOT be concerned with the outcome, that’s the end result. Be in the journey of the match…go point by point.

5-Be in the PRESENT moment…NOW is all that exists as the past is gone and the future is NOT here.

6-Take a TIME OUT and BREATHE and just let it go.

7-Put a rubber band on your wrist and every time you think of a negative thought pull it and your body will tell your mind…STOP…it is painful.

8-When you are back receiving serve put your racquet up and count to 10 and LET IT GO.

9-Put writing on your racquetball shoes……. STAY COOL, CALM and COLLECTED….so every time you look down you can read it and remind yourself of this.

11-Fix the strings on your racquet…walk around and LET IT GO.

Continuing The “Making of a Champion”-Racquetball Magazine Spring Issue